Rocking Surprise at the Brothers of the Sun Concert 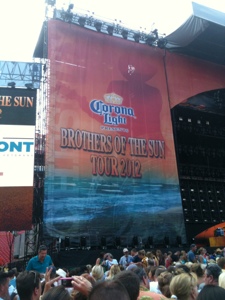 This past weekend I attended the Kenny Chesney/Tim McGraw ‘Brothers of the Sun’ concert at FedEx Field in Landover, MD. The line up featured Jake Owens, and Grace Potter and the Nocturnals as the opening acts. While Potter and her band didn’t really fit in with the country/island vibe of the tour, she none-the-less kicks some musical ass.

Potter has an amazing voice. I wish that I could remember some of the songs that she had actually sung, but during the first part of her set, I was bewildered as to how this Stevie Nicks clone stumbled into the line-up of two of the biggest draws in modern country. Once I got over myself and really started to listen to her voice, I was blown away. To say that she is a Stevie Nicks clone is, actually, a compliment. Potters voice is just as haunting as Nicks’. In one tune, when she opened her mouth and let the sound just soar out, I finally understood what sailors must have felt when they were seduced by sounds of Sirens. Unlike some voices that may get lost in the funky beats supplied by their bands, Potters remains distinctly above it; never competing, only complimenting. Listen to ‘Stars’ on her website to get an idea of what I’m talking about.

On top of all that, this chick can rock. She was really into her performance and giving it her all even though the crowd was barely giving her a second thought. At times it was a little embarrassing how not into it the crowd was, but Potter didn’t let that deter her enthusiasm at all. She strutted the stage like she owned it. With the right crowd or a crowd with the right mindset, she could.

Also owning the crowd, was Kenny Chensey. Where does this boy get his energy? After his first few songs, I thought that he was going to have to have some oxygen supplied to him by the medics. Kenny seemed to be visibly trying to catch his breath, but he didn’t let that slow down the party atmosphere. He ripped through some of the crowd’s favorites of his greatest hits–‘I Go Back’, ‘Living in Fast Forward’, ‘Boys of Fall’–always keeping the energy up to 110. Even the slower songs like ‘Boys of Fall’ and ‘You and Tequila,’ a duet with Potter, had a low electrical hum to them that kept Chesney connected to the crowd. 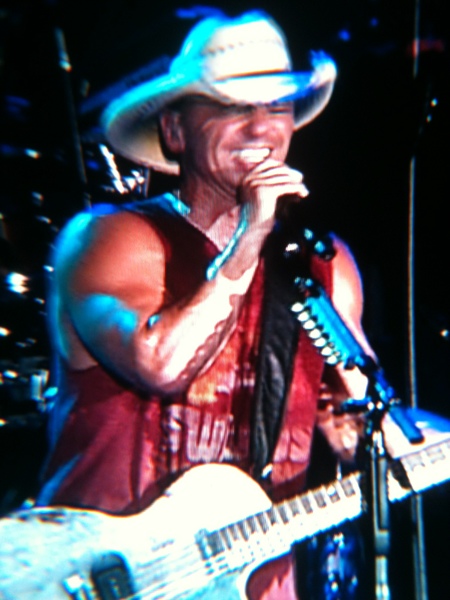 The opposite end of this spectrum was Tim McGraw. He seemed to be sleepwalking through his set. He ran through song after song after song with nary a break. It seemed as though he was plowing through it just to ensure he did the whole written set list before his time was up. There was some light banter with the crowd; a touching moment being when he had us all sing happy birthday to his daughter as he recorded it on his phone, but overall he left me unimpressed–and I’m a huge Tim fan. I’d pay money to have him sing me happy birthday via phone. 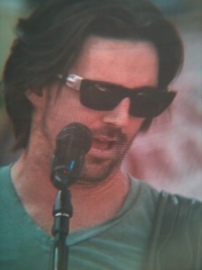 Rounding out the quartet of performers was Jake Owen as the first act. I was a little puzzled as to why he was the first; ahead of Potter, since he is more well known. Maybe the effect was to try and draw a crowd that would hopefully stay for Potter? Whatever the reason this long-haired, mega-watt smile, scuffed-up looker got the crowd going as he warmed them up for the night to come with his hits ‘Yee-Haw’, ‘Alone with You’ and ‘Barefoot Blue Jean Night’ among others. And speaking of blue jeans, This crooner sure knows how make them look good.

While Grace Potter took ownership of the stage with her enthusiasm, Owens took ownership of it with his bod. He strutted and swayed up and down the stage in a way that most models and fashion designers could only yearn to replicate. It was a mixture of casual lope and confident swagger that made the arena one degree hotter with each step. Owen looked so good in his jeans it should be illegal, but the real blue jean crime of the night was Tim McGraw. 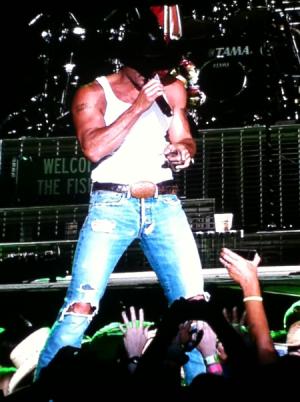 McGraw came out dressed in a white tank top and tore up blue jeans that fufilled a fantasy of many a country fan as he came out for his second appearence of the night. D-A-AYM did he look some kinda good in this outfit. What he lacked in performance in original set, he sure made up for in his costume change. I’m not normally a hot-for-McGraw’s-bod fan, but if he showed up on my doorstep in this outfit I’d hand over my bank account numbers in a snap! In this part of the show, Chesney and McGraw worked through a short number of some of the most well known songs of those two. ‘Indian Outlaw’ and ‘She Thinks My Tractors Sexy’ among the two, but the sexiest thing on stage was clearly McGraw.

All four performers came out on stage for the final song of the night, which, due to McGraw’s outfit, I’ve forgotten what it was. I believe it was ‘On the Road.’ My apologies if that isn’t right. In any event having everyone come out at the end for a final muscial encore was a great way to end.

‘Brothers of the Sun’ finishes it’s summer run at the end of this month in Massachusetts.