Posted on February 27, 2013 by cowboyramdc
Image by Genevieve Adams for BuzzFeed 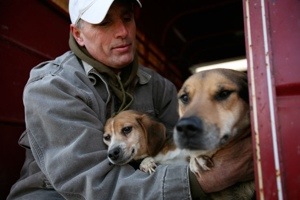 Yup, it does happen. Here in America were we are most focused on gay marriage equality and our recent victories toward that end, you can still be fired for being gay. From BuzzFeed:

Kevin worked as a public school teacher for fifteen years before retiring to run his farm full-time. A few years ago, he went back to work as the director of a day care center in Ashland, Kentucky. After being mocked and teased by co-workers and superiors at work, some of whom constantly referred to him as “twinkle toes”, the center forced him to resign in spite of his spotless record.

He sued for wrongful termination and, though the judge agreed that he had been treated unfairly, there is no Kentucky state law regarding anti-gay discrimination at the workplace.

Kevin is now struggling to pay his bills and keep his rescue farm afloat. If you’re thinking ‘we should send him some money’, ya can. A donation page has been set up via GoFundMe to help Kevin out. The goal is to raise $50,000. As of this post we are about half-way there. Help get us the rest of the way and then some.

Read the original article on BuzzFeed

This entry was posted in local GLBT News. Bookmark the permalink.