Posted on October 7, 2014 by cowboyramdc 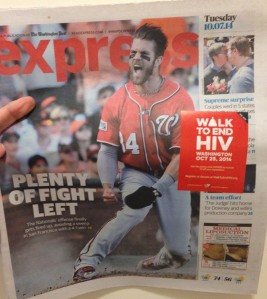 Or so you might think based on the October 7 cover of Washington, D.C.’s Express, the free daily newspaper put out by The Washington Post. Dominating the cover is news of the Washington National’s winning their October 6 game against San Francisco; keeping the Nat’s playoff hopes alive. Relegated to the sidebar is the news of the Supreme Court’s decision not to accept any of the current gay-marriage cases before it; allowing equality for same-sex couples in Virginia, Oklahoma, Utah, Wisconsin and Indiana. This is only one day after the announced decision by the Court.

Does the placement of the of this piece mean that marriage equality has become “boring” just as Michelle Bachmann said at the 2014 CPAC Convention?