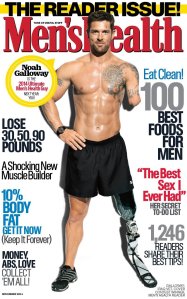 Men’s Health magazine has always provided a lot eye candy with the attractive athletes, television and film guys that grace their cover, but for the first time ever, the coverman is a reader.

Noah Galloway is Men’s Health’s 2014 Ultimate Health Guy; gracing the November 2014 issue. Ultimate Health Guy was a contest from the magazine to highlight the regular workout Joe. Noah was chosen from over 1200 entries in the contest (click on the photo to get a closer look at this Alabama babe).

Fans of Men’s Health know Noah as the cover guy on our November issue. Out of the 1200 men who entered our first Ultimate Men’s Health Guy contest, Noah stood apart, becoming the first reader ever to appear on our cover.

It might seem like an honor for him to get this opportunity, but really, the bigger honor is for us. Noah was one of those stand-up Americans who watched the towers fall on 9/11 and dropped what he was doing—the start of his education at the University of Alabama-Birmingham—and joined 101st Airborne out of Fort Campbell, Kentucky. When he reached Iraq, he found his calling in life.

“I enjoyed every bit of it,” he told us in his cover story. “I spent a year in Iraq living with the locals, on patrol all the time. I was like, ‘This is it, I wanna do this the rest of my life.’”

He nearly lost his life doing what he loved. Noah was driving a Humvee when he ran into a trip wire. It detonated enough explosives to send him and his five-ton truck flying through the air. When he landed, everything changed.

And if Noah’s in shape body and handsome face makes ya melt, wait ’till ya hear the southern drawl he’s got with this interview by Ellen DeGeneres.